It has been a while since we had a coffee talk – and suddenly it is May. Today I wrote my morning pages, saying good-bye to April and realized that I had planned so much for this month – and did so little. No photowalks, no color hunts, no collection of shop signs I intended to go for with my camera. Thanks God to the all the photos I had taken in Rome – they were enough for one month’s sharing (and I still have some in store ;)). These coffee photos were taken just before my trip, in the last days of March. The air was still winter cold, but the sunlight was that of the spring. So everyone went outside to grab a place on a sunny terrace, and there we sat, in our winter jackets, enveloping ourselves in scarfs and rugs – pretending that this is a real spring. Celebrating the light. 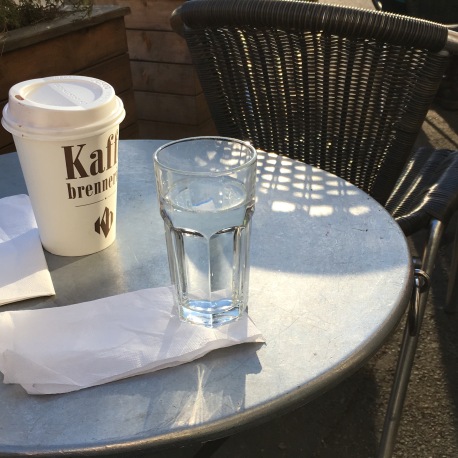 Spring vibes. It starts looking like spring here. At last. You may not believe it, but while the whole Instagram is full of blossoming magnolias and the French blogs show gardens full of grass, flowers and life – here in Norway we had seen some first flowers in April, but the leaves are coming out only now. This winter has been really long, and the spring has been really late. I hear, there is still snow lying in some woods and outside of Oslo. And some days ago I have seen a guy in full ski attire with skis over his shoulder, waiting for the bus. Where was he going, I wonder?

Well, sometimes it is hard to call it spring yet. What is true for April in Oslo is that one day you see people dressed down almost to their bikinis, the next day you wear your winter puffy jacket. Then you walk in a t-shirt, and then again in a rain coat. It is totally unpredictable here. The previous weekend we had temps up to +19, and while the Spanish tourists were still in their winter clothes, the locals filled the parks and streets, wearing shorts and t-shirts. But then the cold came back, the streets got empty again, and yesterday, on the first day of May, it was +3, rain and promised snow (it didn’t show up, but no one would be surprised). I pulled out a wool coat and a wool scarf again – I was wearing them in January sometimes. Five months later and it is still an actual choice. Norway, when will I get used to this? 🙂

But the green leaves are a joy to the eye. Suddenly it feels like real spring. And even if it is biting cold again, and feels like winter is back, I still feel happy. Because it is green! And it is light until 9pm – so the darkness is gone and we head on to the lighter times!

Coffee Talk. How do you like your usual coffee? Do you prefer to take it in a cafe or at home? I like to make my coffee at home, in a coffee press pot, and enjoy it in the company of my journal or my Mac. But there are some days in a month when I walk around with a square head, making notes to myself like in fear of sudden Alzheimer, and coffee has been consumed but the system would not start. Today was such a day, and I felt lost – until I have heard my intuition’s voice. It told me to get out, into the sun and wind, and find a place in that hipster bar around the corner. These are the perks of living in a hipster neighborhood – the Norwegian barista champions just a block away (holding myself fast from bragging :)) There, with the first sips of cappuccino, the universal chaos of my head fell into harmony. And the sound system started playing a song “Månemannen” (The Moon Man) by the band “Vamp”. And I felt like jumping up and telling everyone that I know the song by heart and understand the band’s difficult dialect. Because I have lived in Haugesund, on the West Coast of Norway, and the band comes from Haugesund. And I may not look like I know more besides my hipster hood, but I know. I have been listening to this band a lot, and I used to talk the Haugesund dialect when I moved to Oslo. Nice memory on such a strange day. Do you like going out to take coffee on your own? (And do you know “Vamp”? :)) 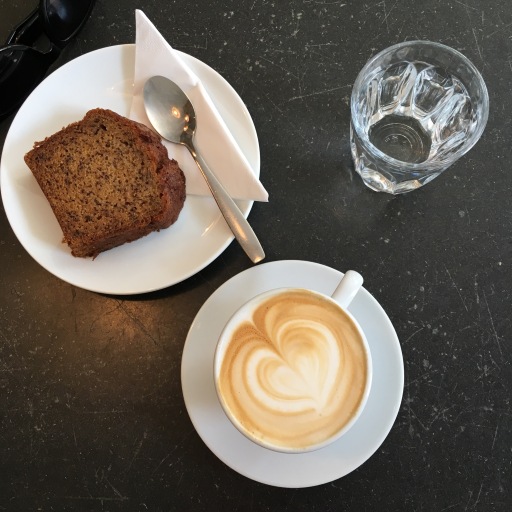 letters on the floor

Color of the month. Though I didn’t go on the color hunt, it turned out that my April had a color theme. I just had to go through my photos searching images for this post – and suddenly I have seen a pattern. It started with those ochre shade that is so typical for the Roman buildings. Then it showed itself everywhere – in my favorite Aperol Spritz, in flowers matching my coffee cup at home, in my drink choice on the plane, flying in the sunset. In Oslo it was the cheerful facade housing a Portuguese cafe “Pastel de Nata” (I still need to go and try their pastry!) – when I stepped out from a job interview and felt happy to discover it there. No need to play guessing games – you can see it easily here (click on any image to view it in the gallery). 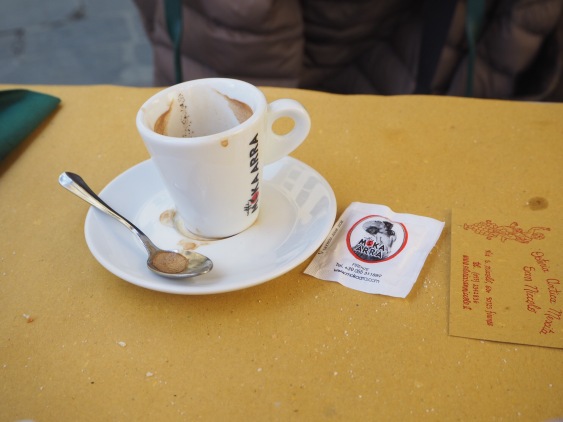 let’s have a seat 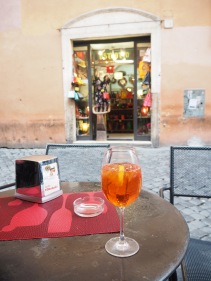 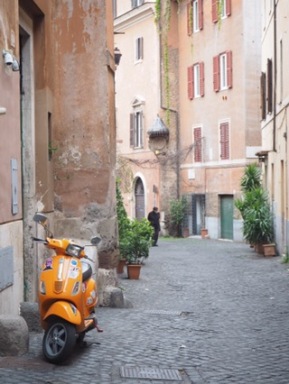 waiting for food to arrive

orange juice in the sunset

I am on my way

Orange was once my favorite color. I find it the happiest and most vibrant of all the colors, even though now I prefer red in clothing and accessories. But when I discovered that my April was spent in an orange filter, I felt an instant happiness. Not bad after all, not bad.

Going shopping. Another collection I could compose is from my favorite activity: window-shopping. Although it is more than “window”, because I go inside (and what else would you like to do in the Northern wind like today?), but I have no intent buying anything – I do it just for the sake of exploring, getting inspired, collecting images. Hence the name “window-shopping”. Except when we went to IKEA to buy some plants for our balcony. IKEA is all on trend these days, with lots of greenery and natural materials. They say, that bamboos lamp has become a hit in different interiors, from hipster cafes to hotels and further. Well done, IKEA! I love this trend. I hope, it will only continue. I vote for more green in our homes and our lives! 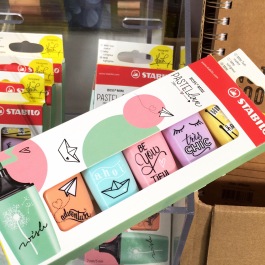 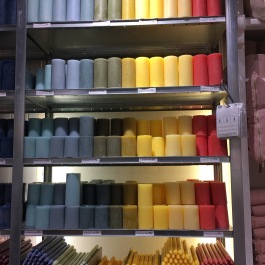 do me a rainbow 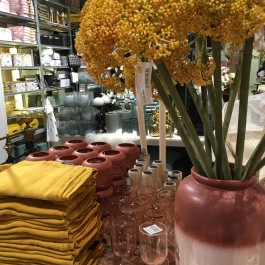 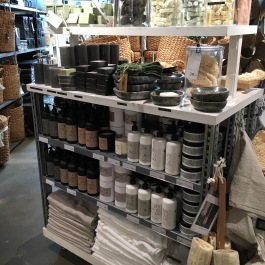 I have spent some time indoors, since the weather was… not always nice (see the discussion above :))). From now on, I hope, I will spend more time on the streets and in the gardens than in stores. Seeing actual greens and colors of nature. That IKEA green and trendy factor, by the way.

An attempt at minimalism. I have wanted to write about lifestyle minimalism and my take on decluttering – for quite a long time. These days I am dealing with the collection of old magazines. I have collected them since 2012 and taken from place to place. Now they just take up the space which we need (Carles is moving the furniture again, throwing away the old shelves), and if we, maybe, decide to move soon I will have to get rid of them anyway. So I am going through them now, cutting out the images that I want to take further with me. But gosh, it was such a sad activity yesterday. Like saying good-bye to an old friend. They have been with me at the beginning of my new life, those magazines. They have seen me change my style, change my life, falling in love and getting my heart broken. I have opened them again and again, after their fashion was out of fashion – but the style never dies. And now I rip into their pages – like ripping in my own heart. Am I too sensitive these days? Is it foolish – to be so sentimental about a bunch of old magazines? (Anyone here with the same collector quirk?)

This was my attempt at decluttering, and it was not so easy (no bragging material yet :)) It will take some time till I can call myself a minimalist, haha. I could never call myself that, but I thought something has changed recently. Not so much as the experience shows, not so much 🙂

What are you up to in the middle of this spring? Any collections, any colors, any spring clean? Share your April thoughts and discoveries! Always lovely to hear from you!

16 thoughts on “A Coffee Talk and April Sum-up”