And it is 17th of May again! A day when Norwegians say to each other “Gratulerer med dagen!” (Congratulations on the day!). An only day in the year when they become extremely social, talking and smiling to strangers, starting easily a small talk. When it is ok to start the day drinking champagne and then put on your best dress or a suit or a national costume – and get in crowds on the streets, laughing and cheering. It is Norway’s national day, a birthday of the country, as they like to put it. Hip hip hurray!

Schoolchildren march to the main street where they will parade in front of the royal palace and wink to the royal family. Adults march later, after the 17. mai frokost (17th of May’s breakfast), some holding beer or a wineglass in their hand. The numerous musical corps play famous national songs. One of them is called “Norway in red, white and blue”, where there is this line: “It is you, it is you, dear Norway! We will clothe you in red, white and blue”. This looks like the official color theme of this month, and I gladly follow it 🙂 Here is my color report of the day, and the month, and some celebration. Join me (no champagne glass needed)! 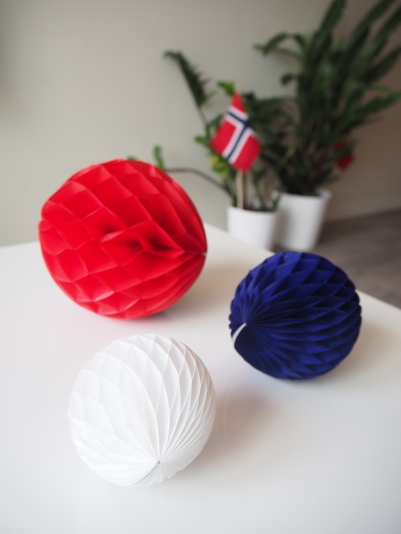 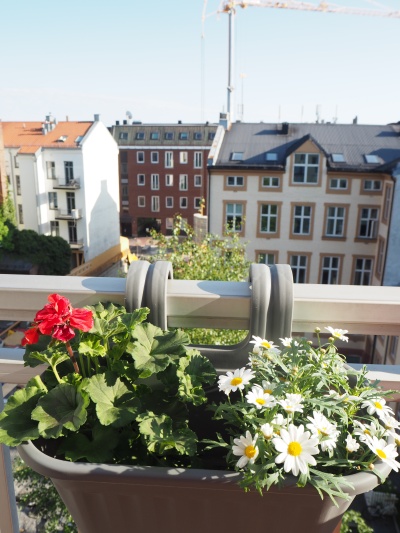 Today is the first time I celebrate the national day as a Norwegian citizen. How does it feel? Don’t ask me. There are no huge feelings to report. But there is one huge gratitude to Norway: it has become my new home, it has given me new opportunities – and new me. So yes, it feels different than ten years ago. Then I felt like a poor Cinderella, looking through the window at their party, and everything was foreign to me, not mine. Now there are things I can feel discontent about – but it is mine now, I can criticize with the voice of the local 🙂 That feels good, I must admit.

Today is the first time we have gathered our friends for the 17th of May’s breakfast – with champagne, of course. And that typical cake, decorated like Norwegian flag. Ahh, ten years ago I had no idea I needed that cake – but thanks to Facebook, now I know what I have missed all those years. I am no talent at baking, but I have an amazing friend who took a cake with her. Another dream come true 🙂 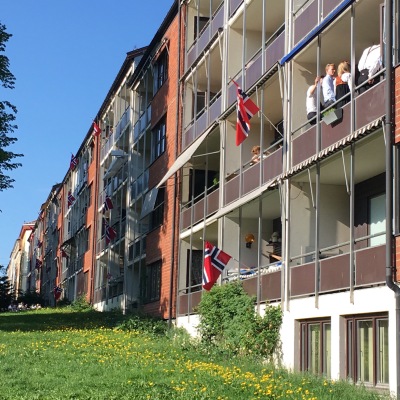 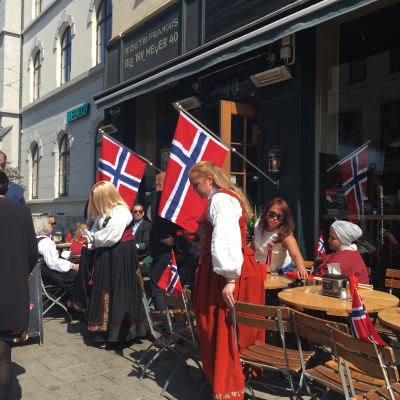 remember to hang out the flag 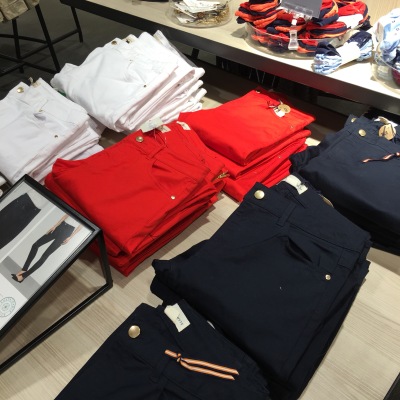 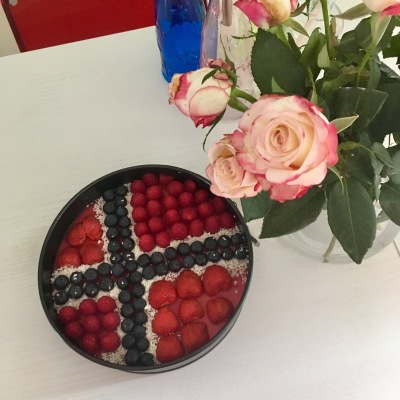 We were so lucky with the weather today! And yes, it is a phrase we often repeat in this country – when we get lucky. We never take such thing as weather for granted. When we get unlucky, we don’t mention it though. This is a country of polar explorers, this is its attitude – silent denial 🙂 But when the sun shines brightly, and it is not too hot, like it was just yesterday (can you believe it?), but it is also not too cold. Because some years ago we have seen snow on 17th of May. And generally, using a winter jacket until first days of June is not unusual here. Unusual were 5 days of summer which happened to us lately. No one could believe it – but everyone tried to use it to its maximum, lying in any green spot with only bikinis, picnicking, barbecuing on the balconies and disposable barbecues in the parks, eating ice cream. But for the 17th of May last week report promised temperature drop and rain, thank you very much. So imagine our joy when it didn’t happen! This is a recipe for happiness, folks: to be threatened by the bad weather, and then get sunshine. I now understand why the central Europeans complain so much: because theirs is the reverse scheme. They expect sunny weather, and when it suddenly happens to rain, they get pissed. Not in Norway. Here we are always ready for the shitty weather – and how much appreciation can be felt when it doesn’t happen, ahh, this is bliss 🙂 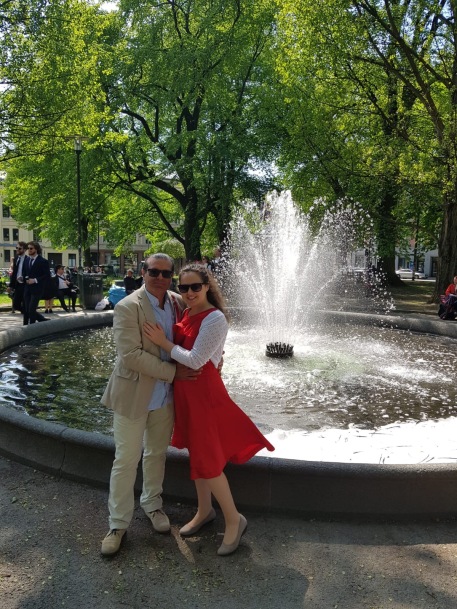 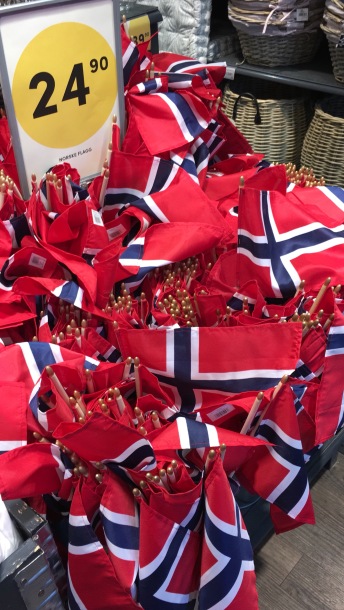 in case you forgot to buy it

After we had our cheerful and happy breakfast, in four languages: Norwegian, Russian, Spanish and Catalan, we headed out for the walk to the city centre – to see some life. And life we saw in spades! Oh, I feel almost like a tourist: suddenly my quiet and shy city becomes all noisy, loud, laughing, dancing, partying, having a really good time. It feels like some kind of festival. And festival it is! The girls are so beautiful in their bunads (the national dresses), I watch every one of them like a picture. I wish they used it more often! Those who don’t have bunads, wear their prettiest dresses, and all guys are in smart suits, so lovely to see them like this at least one day a year 🙂

The only bad luck this time: I forgot my camera at home. So I just had a great time, watching a lot of people, getting tired of all the impressions. But no photo material this time *sad face*. So I came home, saw a mess we left and felt this good feeling: I like seeing the after-celebretion mess, it feels so right, it was a good time. I grabbed my camera and made some photos (Carles commented it like: “You just had an abstinence with a day without making photos” :)). Hope, you don’t mind the after-party mess and can also find some beauty in it. 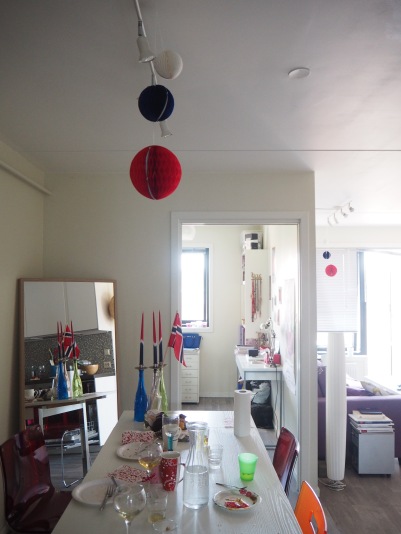 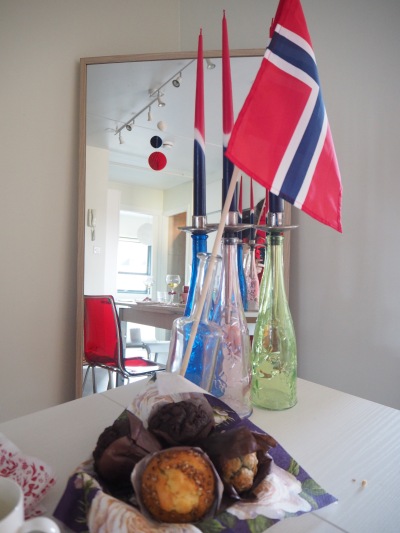 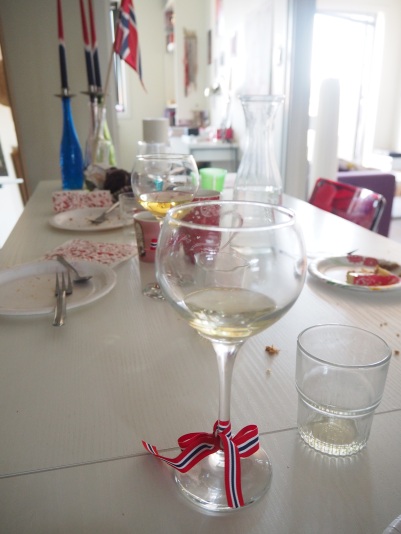 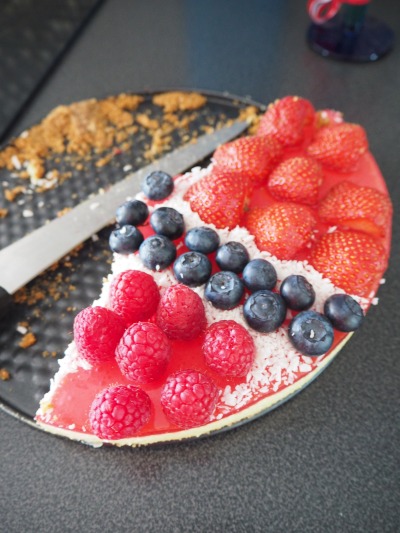 As I write this post, I hear the singing and party going on outside: on some balcony the girls laugh and sing with Beyonce and Swedish House Mafia, in our backyard the young people are making a lot of noise. Which can irritate, but come on, it is just one day in a year! When this nation becomes like a new nation. Celebrating all day long their Norwegian-ness. I know, it can sound funny – but it is infecting. Just come to Oslo next time in May and feel it for yourself. It is so sweet: a little country, which has been under first Denmark, then Sweden, having gained their freedom just some 100 years ago, they are so proud. And I sometimes envy that feeling of being proud of your roots. We have missed it, growing up in Ukraine. This feeling of strong identity, of being a part of a small population, but anyway proud. I get influenced by this feeling, and I also start feeling proud. Norway, you are amazing. So little populated, so cold, so up in the north. You have made it! Wave your flags and sing your songs. We will clothe you in red, white and blue! (Am I getting too nationalistic now?) 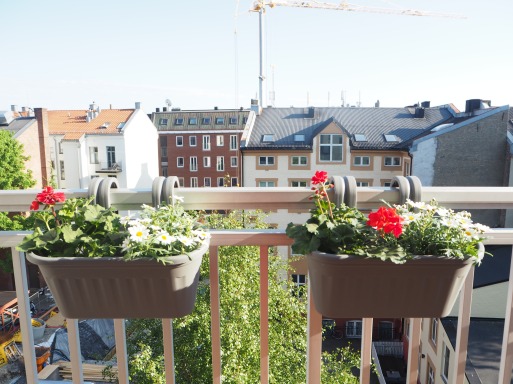 it is in the flowers 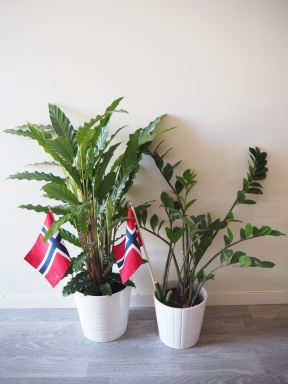 and in the plant pots 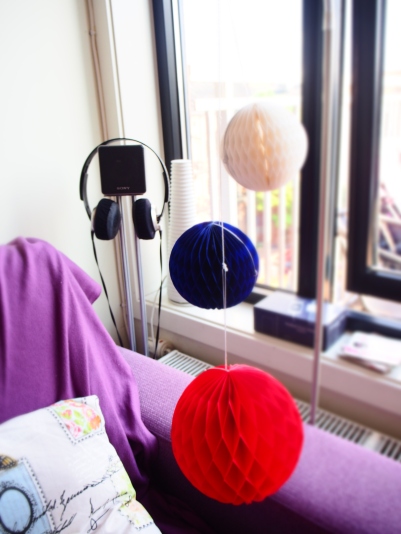 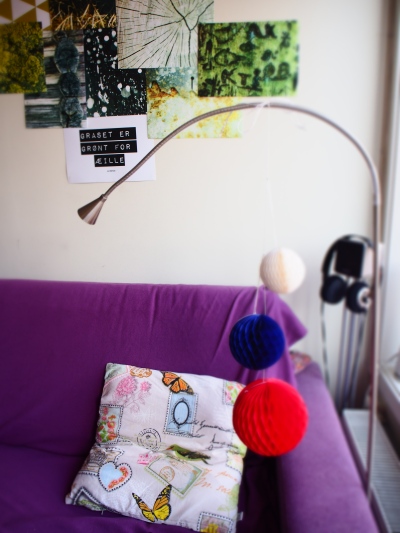 Who is up for national celebrations here? How do you do them? And what is your favorite occasion for celebration?

And may you walk in gratitude! This a real recipe for happiness (not expecting shitty weather, really, not this one :))

24 thoughts on “Norway in Red, White and Blue”